According to the Cambridge Academic Content Dictionary, Civilization is “a highly developed culture, including its social organization, government, laws, and arts, or the culture of a social group or country at a particular time.” The human race is now entering a new age of cyber civilization. There are lots of uncertainty but also new opportunities – Let’s see how our Co-Director, Prof. David Farber, defined this new Cyber Civilization. 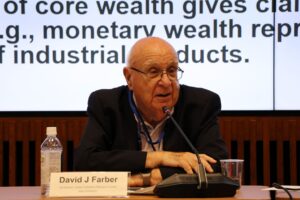 “When the first undersea telegraph line was laid between North America and Europe, It brought together the two continents, previously separated by weeks in sailboats and created a new business and cultural environment. News was no longer old. Now we are connected to large parts of humanity by just 6 degrees and milliseconds.” Dave said.

In the pre-telegraph days, the political leaders could give two stories, one to their people, and one to the rest of the world. Telegraph made that very difficult. Telephone made it even more difficult. It is almost impossible when it came to the development of the Internet. This changed a huge number of things in domestic and international relations.

35 years ago, Dave Farber and Larry Landweber brought a magnetic tape with them to Japan to start planting CSNet, an early NSF networking effort, around the world. Japan then started being connected to the world by a different type of communication technology. Something considerably richer than the telephone.

The introduction of this higher speed transitional tool generated notable impacts on the US. People used to have acoustic modems, which were slow and very limited. Dave remembered his old days at the Bell Laboratories, nobody believed it would ever get faster. “We always had arguments that we had 30 bits per second acoustic modems but would like to do 120, while nobody thought we’d ever need it.” The cost of communication was way too high. It used to cost a dollar per minute to call across the country and extravagant to call outside. Not to mention computer, which was belonged to big organizations only. People had limited opportunities to get in touch with people beyond their cultures. Aeroplanes started to develop but at a very low speed and minimal traffic capacity.

We are now in a connected world
The modes started to change along with the increasing communication brought in by technology. Gigabytes of data are now flowing around the world, especially after the introduction of satellites and fiber optic cables by big technology companies. And now, we have the wireless space, which is changing the inter-personal culture the most. Once the culture is changed, it also affects how people interoperate and communicate, which fundamentally changes many aspects of civilization.

With social networks, the news is no longer something we can only read from the newspaper in the morning, while friends are not someone we have to meet in person. We do not really care about where you are, but we interact. It is a whole new way of people and community communicating. Although it does not always for the benefit of mankind, it is changing how we live.

We have problems to be solved
Not only the modes of communication, technology is also changing the underlying notions of civilization – What is wealth in a cyber-world? How do people trade? How do people accumulate wealth? Who is responsible for monitoring the cyber currencies? There are still many unsolved problems which worth us to look into it.

As mentioned, technology does not always promise good wills. Things change but maybe not always towards the direction we want. Sometimes it intensifies the problems that we are facing for centuries. One example is false news. False news is nothing particularly new. Yet, the social network platforms make it much more widespread now, and harder to trace and control.

We have a real difficulty with the lack of international laws that govern the rules of living in this civilization. For instance, there are no international laws for cybercrimes. There is a lack of global understanding of policy and laws that apply for a cyber-attack on critical infrastructure.

The ownership of personal data is also a big debate at this digital age. “Who owns things about me? Who can access my medical records?  People are making assumptions of what I am going to do in the future, potentially what my children will do, of course including my grandson.” commented by Dave.

All these problems can never be solved solely by technologists. It is a multidisciplinary attack. We have to bring together technologists, economists, lawyers, social scientists and policymakers to look at this evolving world. We are here to tell people what the options are and what is going to happen in the future.