CSNET and a Retrospective of the Impact on Asia

The 35th Anniversary of the CSNET connection between Asia and USA

To celebrate the 35th anniversary of the first connections between Asian networks and the (at the time) U.S-centric Internet, David Farber and Larry Landweber, two leaders of the CSNET project, hosted an online symposium on October 24 JST (Oct 23 EDT). This event was supported by the Keio University Cyber Civilization Research Center and the WIDE Project.

CSNET was funded by the U.S. National Science Foundation in 1981 to build a network that would connect all U.S. computer research groups in academia, industry and government. The Internet protocols were chosen as a key alternative for connection, making CSNET the first non defense-related component of the Internet.

In 1984, CSNET negotiated an agreement with the U.S. Department of Defense to allow networks outside the U.S. to connect to the Arpanet, then the core of the nascent Internet, via CSNET. Japan and Korea were soon approved. In October 1985, David Farber and Larry Landweber visited Tokyo and Seoul to bring the required CSNET software. The implementation of these connections was a seminal event in the development of the Internet.

Pioneers involved in the development of CSNET and Asian networks and the connections between them were invited to share their personal memories from this exciting period in the history of the global Internet. Included were Vint Cerf, Rick Adrion and Laura Breeden from the U.S., Jun Murai and Hideyuki Tokuda from Japan and, Kilnam Chon and Okhwa Lee from Korea. 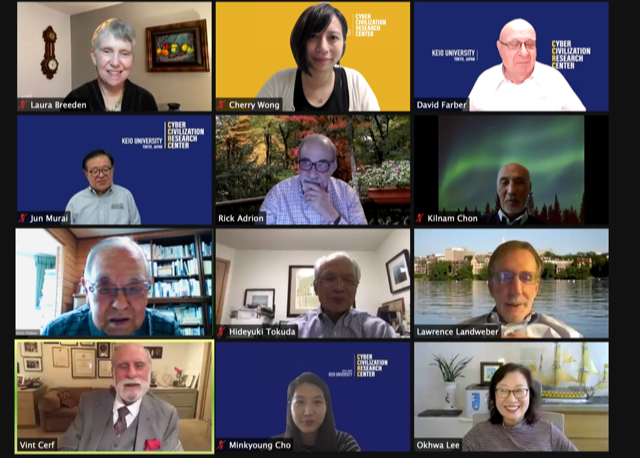 Cerf welcomed everyone to join in this important network history milestone. The development of the CSNET marked the beginning of NSF’s interest in networking and the success of CSNET motivated future NSF infrastructure activities, such as NSFNET and the NREN. It is a timely moment to recognize and acknowledge the effort of everyone who has been involved in this historic event.

Farber and Landweber walked us through the history of CSNET, which started in 1981. The beginning of the CSNET project was challenging. It was not an easy task to gain recognition of the significance of networking at that time. Fortunately, with support from the NSF, most USA computer research schools were connected to CSNET during the 1980s. In addition, there were requests from all over the world.  The International Academic NetWorkshops that were attended by network pioneers from many countries helped to build support for international connections. So in 1985, Landweber and Farbeer brought the physical tapes (software) to Japan and South Korea that would be used to connect to CSNET. CSNET played a major role in expanding NSF’s understanding and support for networking and led to future activities such as the NSFNET and the NREN.

Tokuda and Murai recalled their memories of the CSNET and JUNET (Japan University Network) development in Japan. At that time, the development team encountered three major obstacles: 1) Difficulty in the direct connections to machines 2) Expensive phone calls and strict carrier regulations 3) University experts were limited. In Japan, it was hard to gain government funding as the significance of networks was not widely recognized. Fortunately, private entities started funding the project, and together with a rising number of international partnerships being established in Tokyo, the government eventually recognized the power of the network and approved it.

Professor Aiso, who was an advisor of Tokuda and Murai at Keio University in their postgraduate days and a key supporter of the CSNET project in Japan, congratulated the successful development of the CSNET and was happy to see everyone being connected online again.

Chon recognized the significance of the US’s role in leading the development of the CSNET. It helped develop the Internet ecosystem in Asia in the following ways: establishing a human network, encouraging information sharing, and joint network development (in Asia and the world). Many international and regional collaborative partnerships were developed in the 1980s, which encouraged and supported the expansion of Asia’s Internet.

Lee shared her experience in network development for educational uses. Activities started in the 1980s when researchers started developing computers for educational uses, and networks started emerging in the 1990s. There were small-scale trial uses of the network in education among China, Australia, Japan, and Korea. This helped to gain support from the government and attracted funding. It motivated universities and researchers to further develop the Internet, which also led to a series of policy changes in promoting computer education among schools in Korea.

Adrion recalled his memories when he was part of the National Science Foundation (NSF). John Pasta, Kent Curtis, Erich Bloch, and Gordon Bell were Key NSF people who contributed to networking development. They encouraged more investment in computer science and networking in universities. This lead to the funding of CSNET,  NSFNET, the NREN, and the widespread deployment of the commercial Internet.

Breeden shared the story of the CIC’s (Coordination and Information Center) involvement in CSNET development. In the late 1980s, network development started extending from solely domestic sites to global networks. More sites were established in different countries. The CIC considered this would be a worthwhile activity despite the fact that it was a rather resource-intensive project at the time. It was not a smooth path. Issues including internet vulnerability and institutional barriers domestically and internationally obstructed progress but yet made the development more dynamic. The CIC was a young community that always wanted to do something exciting – their support for international connections was important to the development of the global Internet.

Jun Murai – Future Activities in Pacific Asia
After reviewing the past stories of the CSNET, Murai brought us to the journey of the current and future network development in Aisa Pacific. Recent dynamics of the internet have been changing, and we are experiencing an exponential increase in the number of Internet users in the past 5 years. Yet, it does not mean that we have reached the end of the development – there is still room for enhancement not only for connectivity but also for continuity, community, coordination, collaboration. New research initiatives in e-culture, medical and healthcare, and agriculture are now the trends in the world community. There are also projects to enhance the submarine fiber-optic cable communication network to overcome some of the potential risks of the existing cables, including the tectonic plate activity, regional political uncertainty, and the melting of the arctic ocean, etc. All these are aiming to establish a safer and stabler environment for internet access worldwide.

It was a very inspiring event that remembered the development of the CSNET/Asia. We thank everyone who took part in the network development to provide a free, safe, and reliable network for the benefit of all mankind.